On 26 May 2018 it finally happened: the presentation of our new family book. Many years we have been working on it with the help of professionals, board- and family members. It was a huge job, which took a lot of headaches, but ultimately led to a more than satisfactory result.

The day started at 09.00 with a radio interview on the regional radio station Omrop Fryslânin the popular program Op en Ûtof presenter Douwe Heeringa. Because the program recordings were also broadcasted live on TV, Friesland and a large part of the Netherlands were able to take note of the book pesentation. The size and design in particular reaped appreciation from the presenter.

At 10.00 AM the family reunion started in Bolsward. 100 relatives had registered and that was also about the capacity of the Convent, the building next to the Martini Church, where the reunion took place. A great turnout, which the board was very happy with. By mid 11 the chairman welcomed the attendees and told about the program of the day. Also because the weather was beautiful, the family members spread out over Bolsward after the coffee with orange cake where, among other things, the Broerekerk, the location of the eastern Knossen mound (where the board had placed a Cnossen flag) and the Martinikerk could be visited. The latter accompanied by beautiful organ playing by Piet Cnossen from De Steeg. In the Martini Church are the tombstones of two of our earliest ancestors: Johan Wpckes to Knossen and his sister Anna Wpckes to Knossen. They are the 4th generation in our family tree and lived in the 16th century. The two gravestones were decorated for this occasion with a beautiful flower arrangement with ribbon. 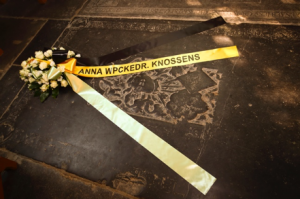 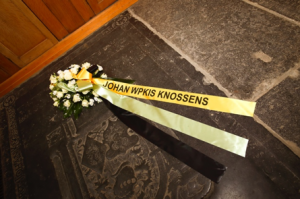 At a quarter to 12 everyone was back in the Convent and the traditional sale of the lots started. Meanwhile, mrs. Sikma, the manager, prepared the lunch buffet and Cnossens and Knossens know how to handle this! Soup, croquettes and delicious sandwiches: there was plenty for everyone. At the end of the lunch the youngest participants: Jurek, Maria, Inèz and her friend Sydney pulled out the lots and a couple of relatives received a beautiful Cnossen relic. The lottery is always a success at the reunion, both for the participants and for the treasurer.

During the morning program and also during the presentation in the afternoon Paul (AAB 5.14.7.4.3) and his wife Edith from Hoofddorp prepared a childrens program, where clogs could be painted with the Cnossen weapon. This was enthusiastically received. Paul had asked his colleague Jacco van der Kuilen, a professional photographer, to record the whole day on photographs. We know the result in the meantime. 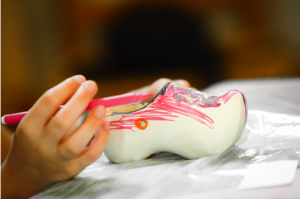 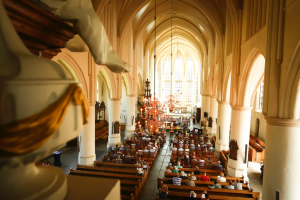 At half past 2 everyone gathered in the Martinikerk, together with a hundred other guests who wanted to attend the presentation of the new family book. They did not regret that. It became a stylish presentation of a special family book. After the welcome speech of the chairman, the stage was to for the Johannen-trio.These semi-professional musicians showed their best with a beautiful performance and a varied repertoire of Frisian songs, a cheerful march and understated classic pieces.

Then the word was given to Dr. Annemieke Galema, who gave a lecture about the letters that early emigrants sent to their retarded relatives and the conclusions that can be drawn about the way in which they lived. Mrs Galema received her Phd. on this subject and also used letters from the archive of our Foundation for her thesis. A very interesting argument, especially because it comes so close to our family history. 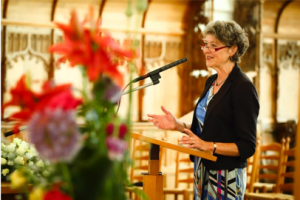 And then the clock of the Martinikerk started ringing at 14.51 pm as an introduction to the next agenda item: the presentation of the new book. Chairman Jelle led that highlight as follows (speech shortened): 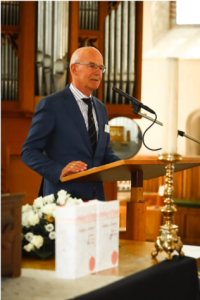 It is 4 minutes before 3: 14 hours 56. Fourteen hundred and fifty-six is ​​an important number for us, a special year in our family history. It was the year in which our ancestor Uupcka Johannis to Knossens signed a charter in which a certain Peters Maartensoen publicly declares that he has received an inheritance from his uncle and that he therefore renounces all claims to 4 pound of land. It is the first printed proof of the existence of our family. The charter is safely stored in the Tresoar archives in Leeuwarden, a very special possession for our family. Mind: 1456: that was a long way before Columbus discovered America in 1492 and more than a century before the 80-year war broke out in 1568. And now in 2018, five and a half centuries later, we have again a printed proof of the existence of our family and we will present you the second Cnossen-Knossen family book. What happened in that time. Much about this is described in our new book.

The book tells about the early days, the 15th and 16th centuries. We lived as a family then here at Bolsward on the Knossen mounds. Those mounds are very strategic. Near the slack water between the Marneslenk to the north-west and the Middelsee to the north-east, with the island of Westergo in between. A place where ships could come in the early Middle Ages and where Scandinavian ships undoubtedly have been. I’ll come back to that.

Around 1600, the family moved to the Hommerts. And they have experienced that in the Hommerts. Our family expanded enormously and owned many farms over the centuries. We report extensively about this the book. It is striking that despite the fact that no surnames were customary in those days, our Knossen name always remained. Sometimes the name was omitted, but it came back in later generations. Yet very special that bond with Knossens has persisted. At the end of the 17th century we lose sight of a large number of family members, but fortunately the 3-generation branch Sierc Johans, his son Johan Siercs and his grandson Sierc Johans Cnossen remain known. And the latter is the ancestor of all our famous Cnossens today: a huge family tree of about 9,000 names. Where did these others all go? We have no idea, but sometimes there is a name that can be related to Cnossen that we do not know the origin of. I was once in Erfurt and there I saw a bookstore Crossen. The owner was able to tell that his ancestors had emigrated from the Netherlands to Leipzig in the 17th century to work as carpenters: undoubtedly family members.

The family then splits into 6 branches in the years around 1700. We still know those branches: the A, B, C, D, E and F branch. The C, D and E branches are extinct. The A, B and F branch are vastly expanded. It is interesting to see how the different branches have a number of peculiarities. For example, we see many soldiers in the B-branch and many farmers in the F-branch. The A-branch is somewhere in between with a mix of both. We have paid much attention to both the farmers and the military in the book.

And of course the book has an extensive pedigree from after 1700. Many family members have sent data and photos and we have all included them in the book. With 900 pages it has become a comprehensive book. With great pleasure, but also with some frustration, the editorial team worked on the book. The last 2 years very intensive, but in the 10 years before we also spent a lot of time on it. Together with the authors, I think we have made a nice document. Apart from the external authors, all sitting board members have also written parts of the book. I call them: Jelle, Johan, Lieuwe, Foeke, Jim and Clarence thank you for your effort. And Johan Johans reminde me to honour our supporters: Carry, Teatske, Tsjitske, Cheryll, Nanny and Adrie: thank you for your patience and support.

What is the value of this book:

When in 1959, 60 years ago, Geert, Pier, Jelle and Simen Cnossen took the plan to map the family, they could not suspect that their actions would have such an effect. They then put all four in the pot and started to document the family tree.
It has not remained there. No, we have had decades of scientific research carried out into the details of our family history and put it in writing. And that was certainly not free. It has all been paid from the donations of our relatives, our loyal donors. Without their sometimes generous donations, this would not have been possible. Thank you for that.
It eventually yielded two beautiful documents: in 1988 the first family book and today the second. Together good for 1700 pages Cnossen Knossen family history.
At a time like this we want to think about the board members who also contributed to the two books, but who are now no longer there. I’ll call them:
Geert from Jutrijp, Pier from Drachten, Jelle from Rijs, Simen from Sneek, Cornelis Taeke from Stockholm, Pieter from Winterswijk and Pier from Tolbert. We do not want to forget them.

On the other hand, because we have not limited ourselves to people named Knossen, but have placed it in a slightly broader context, the new book also contains many leads for researchers from outside our family. In the specialist literature our new book is already receiving a warm welcome. Not only family members, but also many genealogists have been looking forward to the publication, as is shown in particular in the Genealogical Journals of the Fryske Academy 2017 and 2018.

Then the chairman asked whether Jim Cnossen wanted to come forward. Jim is our family ambassador in North America. Because of his merits for

setting up the American branch of our family foundation, he was offered the first book with the request to receive it on behalf of the entire family. Jim was very surprised and honored. In his subsequent speech, he praised the cooperation in the board and the tremendous effort that was made to realize the book.

At the end of the meeting the Johannen trioplayed a number of songs and we ended the meeting by singing together the national Frisian anthem.

Then the ordered books could be collected at the back of the church and while enjoying a cup of coffee in the Convent the day could be evaluated in talking.

The board is very pleased with this day and is convinced that the new book will contribute to strengthening many family ties.

History of a Frisian Family